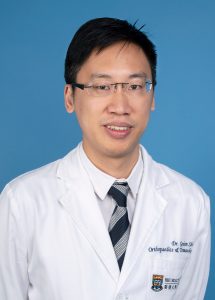 Dr Graham Shea graduated from the University of Hong Kong in 2012 as a member of the first cohort of candidates recruited to the combined MBBS / PhD programme. His doctoral thesis was undertaken at the Department of Biochemistry in the field of regenerative medicine. After completing his internship, he joined the Department of Orthopaedics and Traumatology as Clinical Assistant Professor and Resident under the Croucher Foundation Scheme for Young Clinical Academics.

Projects in the above areas for Final Year Project students, MPhil and PhD candidates are available together with studentships for high-achieving individuals. Enthusiastic and committed students are encouraged to contact me via email.