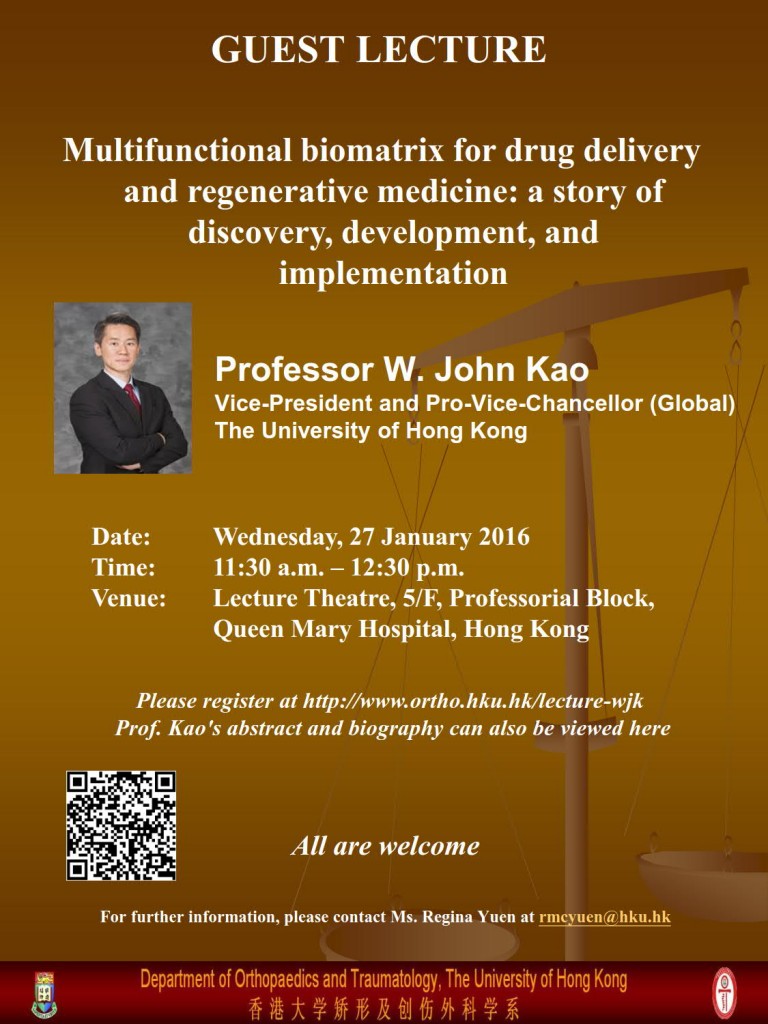 Multifunctional biomatrix for drug delivery and regenerative medicine: a story of discovery, development, and implementation

Various synthetic polymers, most notably polyethyleneglycol (PEG), have been explored in the formulation of hydrogels for the presentation and the delivery of bioactives including small molecules, biologics, and therapeutic cells for basic and applied research. Integrating biomolecules such as peptides and proteins into the hydrogel matrix can induce favorable bioactivity and desired physicochemical properties to achieve intended endpoints. In addition, due to the poor mechanical stability of biologically-derived hydrogels such as collagen, many have incorporated PEG into the polymer matrix to enhance the mechanical strength and longevity in vivo. In general, interpenetrating networks (IPNs) consist of a binary system of two polymers that are chosen to better control the physical and biological properties of the hydrogel. A robust and versatile IPN platform consists of cysteine-conjugated gelatin and PEG-diacrylate (PEGdA) has been developed. Both components of the IPN, gelatin and PEGdA, are crosslinked together via a thiol-ene reaction with or without UV light in situ. In comparison to a physically entangled network of gelatin and crosslinked PEGdA, the IPN shows improved mechanical properties. In vivo degradation can be further modified by various formulation parameters. This biomatrix has been used to encapsulate various cell types such as fibroblasts, keratinocytes, and mesenchymal stromal/stem cells as well as small molecular weight drugs such as minocycline, silver sulfadiazine, bupivacaine, and biologics such as peptides and growth factors. A clinical-grade article was developed and showed improved healing in preclinical large animal studies. Recently, Sigma-Aldrich (Merck) launched two product lines based on this platform technology. The discovery and development of this technology offers a case study on the challenges and opportunities in translating life sciences technologies from the university. New paradigm on how world-class research universities can facility this will also be discussed.

Prior joining HKU as Vice-President and Pro-Vice-Chancellor (Global), Professor W. John Kao was Vilas Distinguished Achievement Professor of Pharmacy, Surgery, and Biomedical Engineering at the University of Wisconsin – Madison. He also served as an Executive Director of the Institute of Clinical and Translational Research, a consortium based in UW-Madison of multiple campus partners and research-intensive universities in the Midwest.

Professor Kao’s overall research focuses on the role of biomaterials in the management of various pathological conditions including cancer and wound healing. He has the background in the design and characterization of biofunctionalized technologies to complement the dynamic host response and wound healing. The biomaterial technology developed in his laboratory is currently on the market through Sigma-Aldrich (Merck).

He produced more than 80 peer-reviewed papers in top journals. He has received numerous national and international recognitions including the Vilas Associate at UW-Madison, elected fellow of the American Institute of Medical and Biological Engineering, the International Union of Societies for Biomaterials Science and Engineering, where he also has served as the Secretary for the College of Fellows. His extensive involvement with industry, regulatory and policy bureaus has enabled him to build a consistent track record of success in the development of bioengineering to impact clinical medicine, pharmaceutical sciences, and emergent technologies.